Last weekend, two very important events happened. The first is that one of my best friends, MC got engaged! We have a very long friendship – 23 years! The second important event was a friend’s wedding and the Bride and Groom asked me to be their Pastry Chef and make the wedding cake! Such an important job for a special day. I was so excited and couldn’t wait to help Charlotte & Sean celebrate their special day. 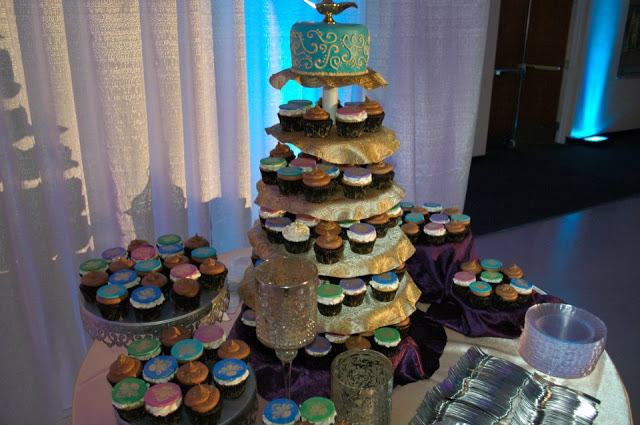 Charlotte was specific with what she wanted… cupcakes! She wanted a mixture of 150 white almond cupcakes and some sort of chocolate cupcake. We had a tasting and they chose a White Almond Cupcake with Vanilla Bean Buttercream and a Mocha Cupcake with an Espresso Frosting.

I had come up with a few ideas for a design and she said she trusted me with whatever I chose. We decided that bright Moroccan colors would be great, so I made about 100 fondant disks in all different colors. The disks dried for two days, so they would be sturdy enough to sit on top of the cupcakes. 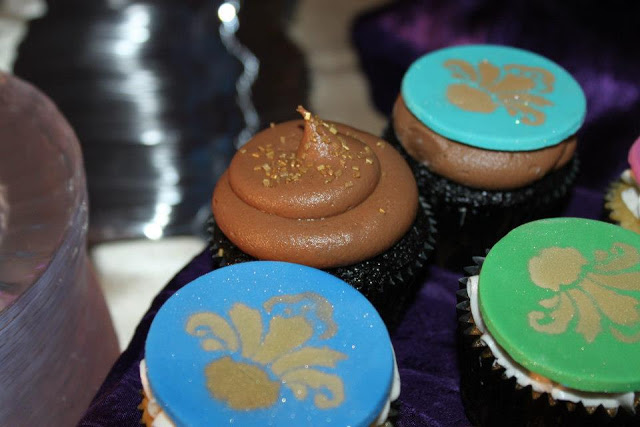 After some time at the local craft store, I began making my own stencil with a stencil burning kit. I used Edible Gold Spray with the stencil and loved the way it turned out. I will definitely be making more of my own stencils for future projects! 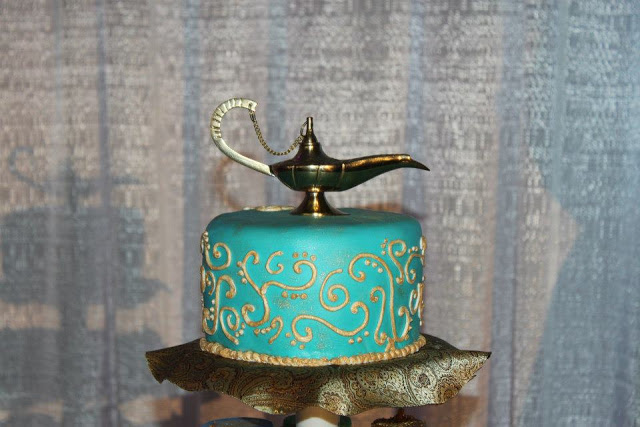 The top tier was Almond Cake with Vanilla Bean Buttercream, covered in teal fondant and piped with royal icing. I painted gold luster dust, with a few drops of Vodka, onto the royal icing. Charlotte found a simple and perfect cake topper – a gold lamp. The day was beautiful and everyone enjoyed the cupcakes. Most people had one of each flavor! 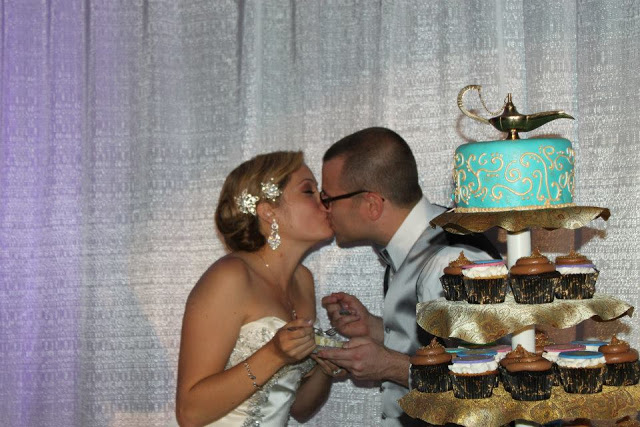 Vanilla Bean Buttercream Directions:
– Buttercream can be made a day in advance and kept in the refrigerator. I also keep mine in an airtight container on the counter if it will be used the next day. Make sure all the ingredients are at room temperature before starting.
– Create a double boiler on the stove by warming a small pot of water on medium until little bubbles form.  Make sure the bottom of your stand mixing bowl cannot touch the water.
– Place Eggs and granulated Sugar in the bowl of your stand mixer and put on top of the pot. Turn the temperature down to medium-low and whisk continuously until the sugar completely dissolves and the eggs are warm.
– Once warm, immediately place the bowl on your stand mixer, fitted with the whisk attachment, and whip on high until white, glossy and doubled in size. (I place aluminum foil around my mixer to keep the heat in.
warm eggs whip better. Remove the foil once the eggs are ready.)
– Continue whipping the eggs on medium-high until they are room temperature
– Add the Butter into the whipped egg whites and whip until incorporated. Scrape the sides and bottom of the mixing bowl
– While on low speed, gradually add in the Powdered Sugar. (not all at once, or both you and your kitchen will be covered in white!)
– Add in Vanilla Bean Powder

Assembly:
– Once the cupcakes are cool, frost using a piping bag and large star tip